2 weeks Post op....my 16yr old has confessed that she did TWO cartwheels in her bedroom last night!

Now 2 weeks post op and Maddie is healing well. I asked if she became dizzy or if her head hurt when doing cart wheels last night. Her reply, "No, I would have never done TWO if it hurt." Looks like the hardest part left now is trying to keep her on the low. She is asking to play Winter field hockey already and will go back to school, half days, on Monday.

The only issue we are having is her I.V. area needs to be looked at tomorrow. She had the same one for 6 days in the bending crease of her arm..It has some discharge and looks like a good size hole, also her vein is rock hard about 6 inches towards her bicep, just afraid of blood clot....

Her is a photo of her very good healing scar at 2 weeks, very itchy!!! But healing well:) 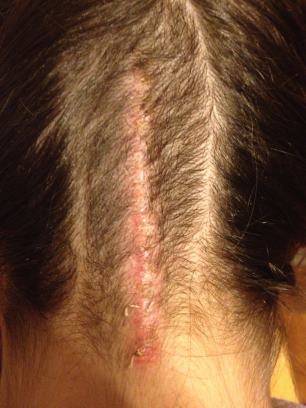 So glad to hear that your daughter is doing so well! I'm 6 weeks out and must confess I'm kind of freaked out to have my head upside down still. lol. Remind her to take it slow because there is still a lot of healing and adjusting going on in there! :)

That would SO be my girls. They are gymnasts. One had a sprained wrist a while age and the doc made her keep a splint on for a week cuz he knew she'd be on it if he didn't (and she still was after a few days anyway). ;)

Dear Pan, I am glad to hear that Maddie is feeling so much better! Way to hang in there with her! Her scar is beautiful ... what a wonderful badge of courage! At the same time, cartwheels and returning to school are ill advised ... as is winter field hockey. There have been incidences of tears/leaks in the dura patch up to months post-op. It will not hurt until it is way, way too late! Hence, it is very important that she not put too much pressure on the dural patch until at least six months. Also, if she returns to school too fast, the school might not understand her continued vulnerability and she may have some attention and/or cognitive processing problems until the three month point that she is not yet aware of but will become evident once she tries to start and study again. I don't want to be a "buzz kill" for you or Maddie - especially since I am SOOO happy that she turned the corner. At the same time, I want to support you in your caution and to continue to encourage her to "take it slow". Maybe she could be the manager of the winter field hockey team so that she stays involved. Those field hockey balls are big and hard. One hit to the head or one fall could undo all the hardwork that the two of you have put in over the past months and put her right back where she started. June will come soon enough and she will be able to get back on the field. God Bless, Fr. D

It is so funny that you posted this. My grandaughter, 41/2 yr old, Maura, who had her decompression surgery on Nov.7th did the exact same thing. My daughter said she caught her doing cartwheels last week, and after correcting her, she told her mom that "it doesn't hurt her to do them". She also caught her jumping in their jumpy castle in the basement. It does scare me and I hope she does not hurt herself, but HOW do you stop these youngsters who feel so good from doing things that they have always done so naturally?

Congratulations! So happy to hear her doing well.